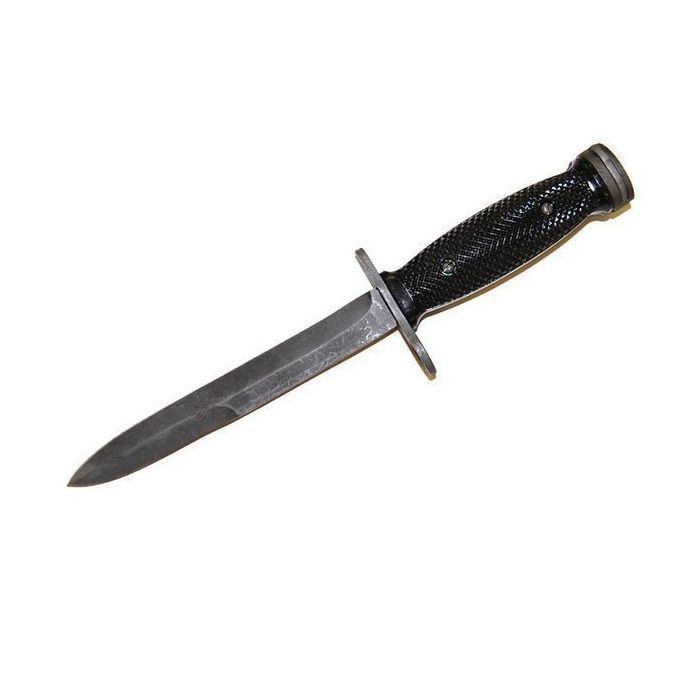 The M4 Bayonet is the USGI standard issue bayonet for the M1 Carbine rifle. The M4 bayonet was issued in large numbers with virtually all bayonet lug equipped M1 Carbine rifles. With a standardized design that has been updated as new service rifles have been issued, the M4 bayonet is well balanced and combat tested by US soldiers for decades.

Notify me when this product is in stock
SKU M4-BAYONET

The M4 Bayonet was issued for only a very short period due to the limited time when the M-1 Carbine was being issued. There was never any performance issues with the M4 bayonet, but soldiers who were issued M-1 Carbines often wanted a harder hitting round for their main battle weapon. This lead to the development and adoption of the M-14 rifle which meant the M-4 Bayonet was no longer needed.

While soldiers felt they needed a stronger main battle rifle, the M-1 Carbine became extremely popular with civilian shooters and collectors. These M-1 Carbine fans have bought, sold, and traded original M-1 Carbines many times over and few if any came with original accessories. One of the most sought after accessories for an M-1 Carbine that features a bayonet lug is the M-4 Bayonet which is also one of the more rare M-1 Carbine accessories.

Please note: As these bayonets were made over 50 years ago, they have been arsenal refinished with newer plastic grip panels. There may also be minor differences from the bayonet pictured.

Overall Rating
M4 Bayonet
Review by Alan 6/5/19
Was exactly as advertised. An original US M-4 bayonet designed for the M-1 Carbine and it fit my new production Inland 1944 model perfectly. Did not come with sheath, but I already had the m-18 and it fit like a glove. I was very happy since these are becoming very rare and difficult to obtain.
Overall Rating
M4 M1 Carbine Bayonet
Review by MikeM 8/2/16
Korean War Era style.
Definitely arsenal parkerized refinished with period correct markings.
Almost looks too new.
Excellent shape and value. Hard to find this bayonet at a reasonable price.
I lucked out. It will do.
Overall Rating
Satisfied
Review by J 10/6/12
This is a good bayonet, it needs to be sharpened but overall I am satisfied with my purchase.