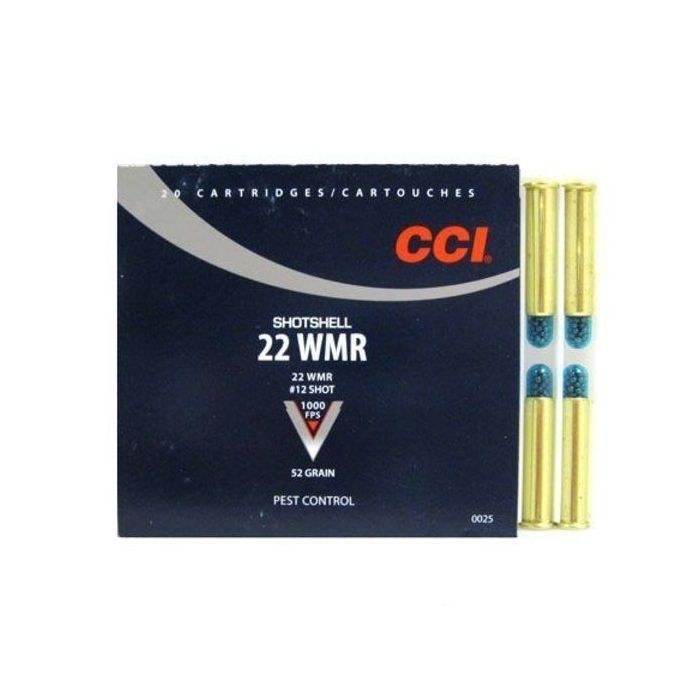 4.5 2 (2)
CCI .22 WMR No. 12 shot is a product from Cascade Cartridge Inc. Developed as a pest control rimfire shotshell that is ideal for taking care of pests at close range, CCI .22 WMR No. 12 shot is designed for high muzzle velocity alongside tight, even patterns. Each box contains 20 brass-cased rimfire shotshells, each of which contains 52 gr of No. 12 shot. These non-corrosive shotshells are perfect for use with single-shot handguns and rifles, as they are not intended to cycle in semi-automatic firearms.

CCI .22 WMR No. 12 shot is a product from the company's extensive line of pest control ammunition. The pest control lineup offers a variety of rimfire and centerfire handgun loads in several different calibers that utilize the innovative bullet and shot technologies developed by CCI over the course of its storied history. Whether using a traditional projectile or shot, each product in the pest control line is marked by its consistent high performance, uncanny accuracy and outstanding value – all qualities that make this ammunition a perfect choice to take down any pest.

That said each box of CCI .22 WMR No. 12 shot, as noted, contains 20 non-corrosive, brass-cased rimfire shotshells. Each shotshell contains 52 gr of No. 12 shot, which provides an excellent option for taking care of pests at close range while also providing respectable muzzle velocities. In fact, this particular load is capable of producing muzzle velocities that have been observed to travel at speeds of up to 1,000 fps. All CCI ammunition is manufactured using premium raw materials and newly manufactured brass cases in the United States at their main manufacturing facility in Lewiston, Idaho. 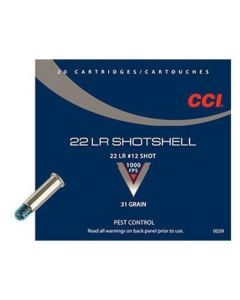 Overall Rating
Varmit killing rascal!
Review by RemMax 4/18/13
Verified Buyer
I tried one of these on a coon that kept tearing my trash up on my back poorch
It took 1 shot and it was like he was hit with a shotgun, dropped in his tracks and didnt move again
Overall a handy snake and varmit round to keep around
At close range these things would taks a damn coyote down
Than again I try noy yo let coyotes get that close to begin with!
Beware though, due to the plastic "bullet" do NOT load this in the mag and try to load it.
To use it in a 10/22Mag or my Ruger96 lever just open the bolt and drop in a single round at a time
Otherwise really handy shell to have around when you live in the country!
RemMax
Overall Rating
Great ammo that is fun to shoot
Review by Robert 4/5/13
Verified Buyer
Great ammo for killing small game and snakes. This WMR ammo has lots more kick in it than the normal .22LR stuff they sell(I have both. It is fun to shoot and at the price its worth having a box or two around.